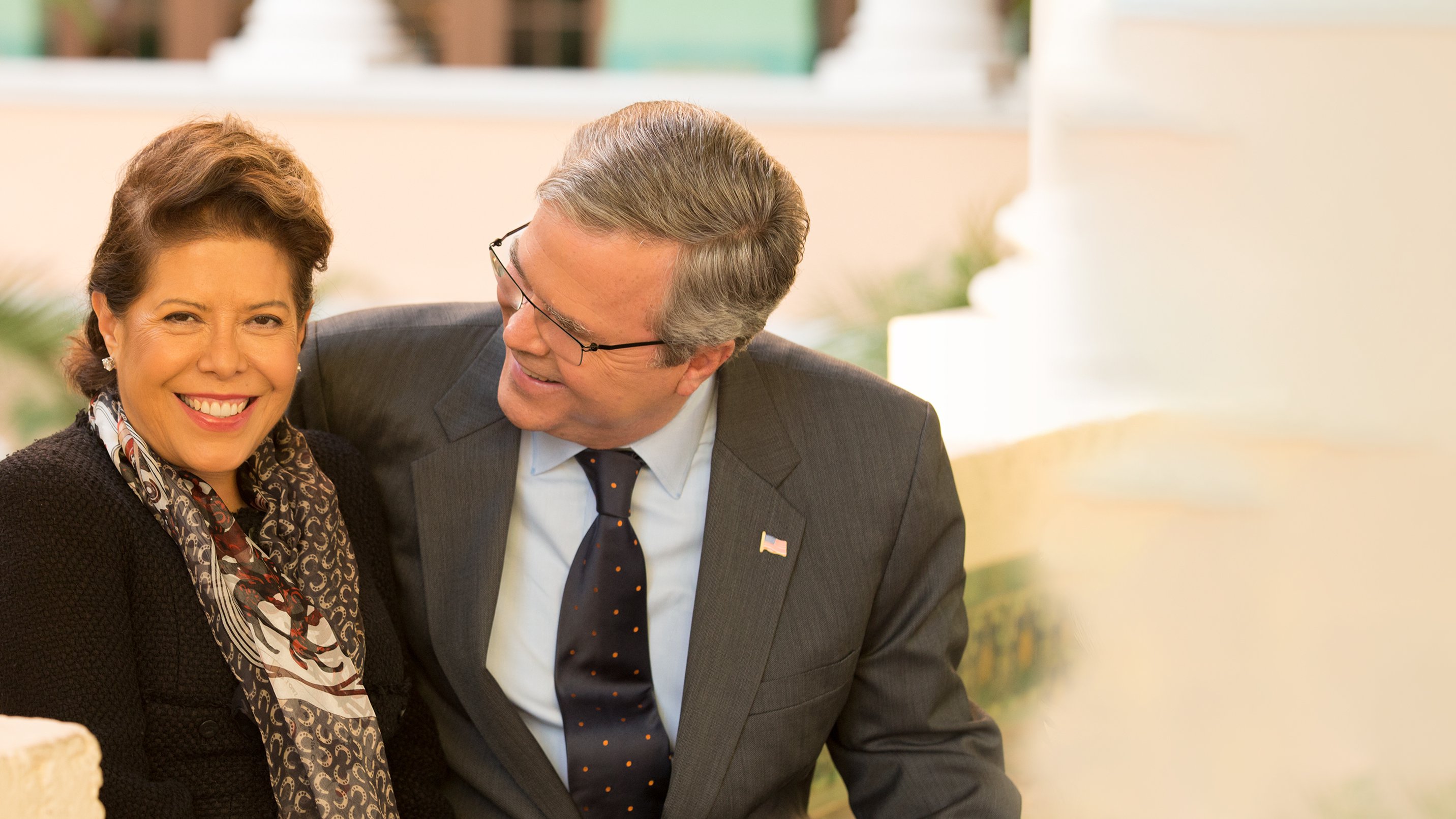 Jeb, John Ellis Bush (JEB) is running for President. Jeb is a shadow of a failed economy, the failed Iraq and Afghanistan Wars, and the catastrophic Hurricane Katrina. He carries the weight of his brother haphazardly on his shoulders, scurrying to salvage his tainted last name. Jeb is the looming Bush, a final attempt to global domination by the Bush family.

When you peel away his need to fulfill his family’s goals – he is a torn man. His most interesting aspects are not his political views, but rather his deeper immediate family issues.

Jeb met Columba on a high school trip to Leon, Mexico. Jeb was Mr. America, shining in Bush glory, pockets full of cash and blood blue, when came to experience a different side of life. But at 17, heart rules the mind, and he fell in love with young Columba. Full of culture and raised on the outskirts of a village, Columba decided to leave her country life behind to marry Jeb. Their relationship lasted 3 years before Jeb gave into his heart.

In a way, Columba represents Mexico and Jeb represents America: Their relationship is a part of a bigger story.

A soul sucking relationship: two countries standing next to each other. Equal at first, brimming with young hope, they decided to share a life – and initially the close proximity was wonderful for the lovers. But over the years, as one gained an ego complexity and his greed itched,  he decided to take away from the other. And the other stood hopeful, repeating the mantra that love can be rocky, but she never wavered in her support. As time went on, and as one partner gave all she could, she watched the other wilt her of her natural beauty. But she had endured too much for too long. Now that she gave all she had, she couldn’t go back to her life before. There is nothing there. Too prideful to have ever assimilated, she now stands in regret of her young and naive ways, stuttering in her overgrown accent and scouring the city for glimmers of home.

Columba expected the American dream she might have heard about in Mexico – fables passed on of a distant man who successfully immigrated and lived quietly in the vastness of America – working hard, with his head down. Her expectations fell short. Columba is a reserved woman, repeatedly telling media outlets that she never asked for fame. Most accurately, she told the Miami Herald in 1992 during her father-in-law’s campaign, “I want to go back to my kitchen, to do the homework with my kids, and—why not—to watch television.”

And Columba fought politics and assimilation as hard as she could. She persuaded Jeb out of Texas, claiming to have felt discrimination’s wrath, and moved to Florida early on in their marriage. There Jeb become Governor, and the position was set in Tallahassee. She tried to live in Flordia’s captial, but craved her own culture. She split her time between Miami and Tallahassee for his term as Governor. But presidency is a beast she cannot escape…

To exemplify his inner struggle further, we can look to his view on immigration.

From a party that rallies around the opinion that America is meant to be dominated by the Caucasian race, Jeb stands on the opposite side of the spectrum.

Last year, the Bush family celebrated the 25th anniversary of the George H.W. Bush library and museum. During Jeb’s speech he exposed a soft spot for immigration, calling it “an act of love.” He took initiative on the issue, delving in and exposing the humanity behind immigration – and peeling away the obscurity of a policy. “The way I look at this is someone who comes to our country because they couldn’t come legally, they come to our country because their families — the dad who loved their children — was worried that their children didn’t have food on the table.”

Can Jeb balance harsh Conservative views with his inner struggle? It’s a battle as old as time, heart versus mind – and only time will tell where Jeb will end up.