Currently, Donald Trump and Bernie Sanders are leading the Republican and Democratic races in popularity. While they stand at opposite ends of the spectrum – they stand in similarity. America’s anger for obscure candidates and policies peaks through in the political revolution these two candidates have conducted. The unconventionality and surprise surrounding these candidates are a product of American rage. 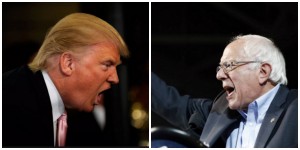 The reason both men are running is because America is tired of establishment based politics. Both candidates speak in easy to understand vernacular and focus on relatable issues that people understand. Politics can become confusing when speaking to laws, lobbyists, special interest groups, and corporate goals. Most candidates have traditionally had to speak on behalf of a plethora of donors and negotiations – but these two threw it all to the wind.

Neither man has been paraded by their respective party or endorsed by major White House politicians. Let’s face it, neither candidate plays by the rules and people love it.

Bernie focuses on issues like free education and healthcare – tapping into our daily needs and appealing to the masses. Sanders speaks unlike most politicians, effortlessly acquiring previously uninterested citizens to rally around him.

Trump does the same – but in an angry old drunk man kind of way. Kicking ISIS a**. Condemning women on their period. It was funny for a while, but now it’s getting really, REALLY scary…

People want to know who is behind their candidate. When unimaginable funds are poured into politicians bank accounts, there is a responsibility of the politician to follow through with their corporate and/or individual goals. The idea is that when you don’t have corporations behind you who are trying to rewrite the law, you can accomplish goals that benefit the citizenry.

Bernie Sanders has set the record of collecting the most individual contributions to a campaign – last quoted as 1 million individual donations amounting to $2.5 million.

And Trump straight out funded himself.

Both men are considered extreme to their relative parties. Sanders endorses a form of democratic socialism consistent with Denmark, calling for free universal healthcare, a higher minimum wage, and free college – walking the lines of the Democratic party set in place by like the likes of Bill Clinton and Barrack Obama.

Trump is not on the lines of the Republican party in terms of extremity,  but also in terms of mental sanity. Trump has famously called for a giant wall separating us from Mexico, a Muslim immigration ban, and perhaps dating his own daughter.

Brooklyn and Manhattan. Guess who goes where?

Perhaps this is the most important and pertinent similarity between the two. Instead of campaigning strategies and their plans for lasting policies, both men participate in emotion pulling.

The extremity of these candidates and their popularity should serve as a wake-up call for politicians and citizens. The fact that the public is so accustomed to dishonest politicians procured this interest in these extremities, and most concerning, in Trump. Politicians must focus on honesty, while citizens should actually do their research rather than rallying around rawness.

One thought on “The Striking Similarities between Trump and Sanders”